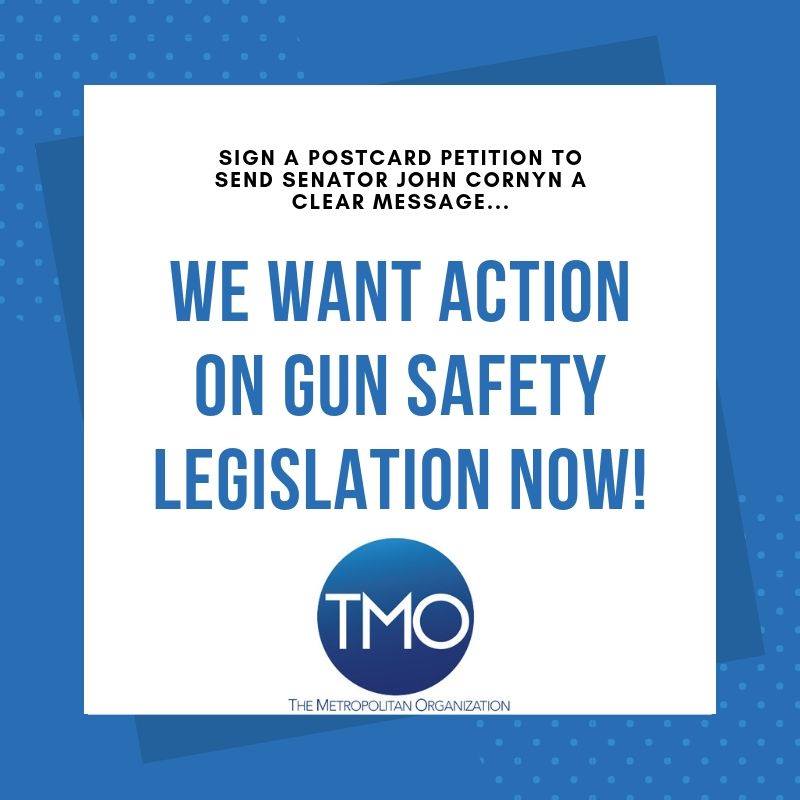 This year, two shootings have taken the lives of Texans in El Paso and Odessa/Midland.  We cannot stand idly by while the blood of our neighbors continues to be shed.

Join us as we ask Senator John Cornyn to introduce legislation to address the repeated gun violence plaguing our state -- specific bills which would enhance background checks, ban high-capacity magazines and pass a federal "red flag" law to prevent those deemed at risk to themselves or others from accessing firearms.

As residents, voters, and faith leaders we call on you as a Senior Senator representing Texas to ensure that the Senate votes on legislation that addresses the repeated gun violence plaguing our communities. HR8 and HR112 have already passed in the house. We ask you to bring these bills to the Senate for a vote, including the ones below once they pass the house:

As the state legislature prepares to convene, local clergy and The Metropolitan Organization on Sunday held a gun control vigil at Trinity United Methodist Church. Those present spoke passionately about gun safety policies.

“Despite the fact that we’re supposed to be a first-world country, a civilized nation, a nation of laws, we continue to see the scourge of gun violence in the United States,” said Houston Police Department Chief Art Acevedo....

David Lyon, senior rabbi at Congregation Beth Israel, read an opinion piece he wrote for the Houston Chronicle in January of 2013. After every mass shooting in the years since, he has referred to the article and says he could still write it word for word. He eventually published a version for his congregation with blanks instead of the words “Sandy Hook” so that members could fill in the name of the latest disaster.

“Our purpose here is to stop filling in the blanks and change the narrative,” Lyon said.

For the Rev. Ed Jones, the pastor of Trinity United Methodist Church, the urgency of the vigil that he had been planning for months had been underscored by personal tragedy that very week.

A family member, 17-year-old Drew Conley, had been shot and killed the Monday before.