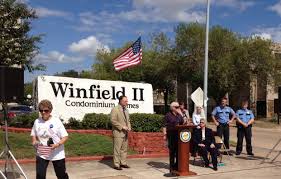 Leaders celebrated the roar of a bulldozer in an Alief neighborhood whose residents have waged a four-year battle to get rid of an abandoned, burned-out condominium complex. In photo at right, Houston Mayor Annise Parker attended the demolition of abandoned apartments.

TMO fought to have the apartments torn down in order to reduce drugs and prostitution near an elementary school. Parents additionally engaged police officers in a conversation about safety issues near Alief schools.