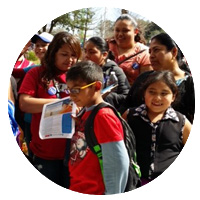 TMO has solid track record of school and community organizing for academic achievement and fairer wages for school employees.

With the Houston Independent School District, clergy supported the lowest paid workers of the school district in a successful effort to raise the wage floor to $14/hour.  In years past, leaders at Trinity United Methodist partnered with Blackshear Elementary to serve as mentors and to find needed resources for the school.

In Alief Independent School District TMO trained parent liaisons in how to improve parental engagement and build stronger relationships between educators and families. Parents met with success when they organized to remove abandoned buildings near an elementary school.

More on both initiatives below:

TMO has developed a relationship with Superintendent Chambers to work with the district on increasing family engagement at five schools, Alief Middle School plus the following elementary schools: Youens, Holmquist, Leistman and Best. The goal of the organizing effort is to develop parent leadership and a constituency to create a strong and safe learning environment.

The organizing is done through leadership teams of parents, teachers, administrators and community members. There are also three TMO congregations partnered with schools - Memorial Drive United Methodist, Santa Maria Virgen Episcopal and Grace United Church of Christ. There are also some apartment owners partnering with us. TMO has also been attending the Superintendent's pastors meetings to develop more partnerships and community support for schools.

TMO has trained parent liaisons throughout the district in how to conduct individual and house meetings (small group conversations). Leaders have conducted three community walks as a way to engage and develop a relationship with parents.

These leaders have already had a couple victories. They successfully fought for the demolition of an 150 unit abandoned condominium building that was serving as a place for drugs and prostitution in the Best Elementary School zone. It was so dangerous for kids that teachers had to accompany the children that had to walk by the complex.

The parents at Best and community leaders organized walks in the apartments and spoke with over 400 families to ask for their support in reducing crime in the area. The organizing team held research actions with the police sergeant and their councilman to develop a strategy to address the issue. Parents working with TMO organized a meeting of over 100 people where they asked city councilman Mike Laster and the police captain to commit and work with the community to address the rampant prostitution taking place right across from Best Elementary school. As a result of that action there has been a significant reduction in prostitution.

A group of 20 teachers and the school principal plus TMO leaders from Memorial Drive UMC walked targeted apartment complexes to invite the parents of the incoming 6 graders for an orientation. Close to 300 parents attended the orientation. The strategy for this school year is to develop a relationship with those parents.

TMO leaders at Trinity United Methodist have begun a relationship with two schools this fall. Trinity leaders, many of whom are retired teachers and principals, learned that many schools in the Yates High School feeder pattern are failing. There is also high principal turnover. The two schools leaders are working with are Blackshear Elementary and Ryan Middle School (now Baylor College of Medicine at Ryan).

In meetings with both principals, leaders have identified several ways to support the schools. Men at Trinity are becoming involved in the "Real Men Read" program at Blackshear. While Blackshear has a library, they don't have a librarian. Trinity is working with retired librarians and others to figure out how to staff the library. Reading is a big emphasis because last year only 33% of fourth graders passed reading.

Ryan is in essence a new school - the old school was closed and it re-opened as a magnet school with federal government funding. One of the stipulations of federal funding is that admission is not based on academic records but purely through a lottery system. Ryan has a lot more resources and parent involvement. The principal noted however that not a lot of students from Blackshear and other Third Ward schools applied.

Leaders are thinking of a two pronged approach. TMO has already asked the Blackshear principal to share the Ryan applications with all fifth grade parents. This would increase opportunities for children in the Third Ward to have access to a high level magnet program. The second part is to figure out how to support Blackshear students who do get into Ryan. Often, these students don't have a strong academic background and will need extra help to succeed at a magnet school.

TMO leaders will also be engaging parents and help develop a PTA because currently the school doesn't have one. 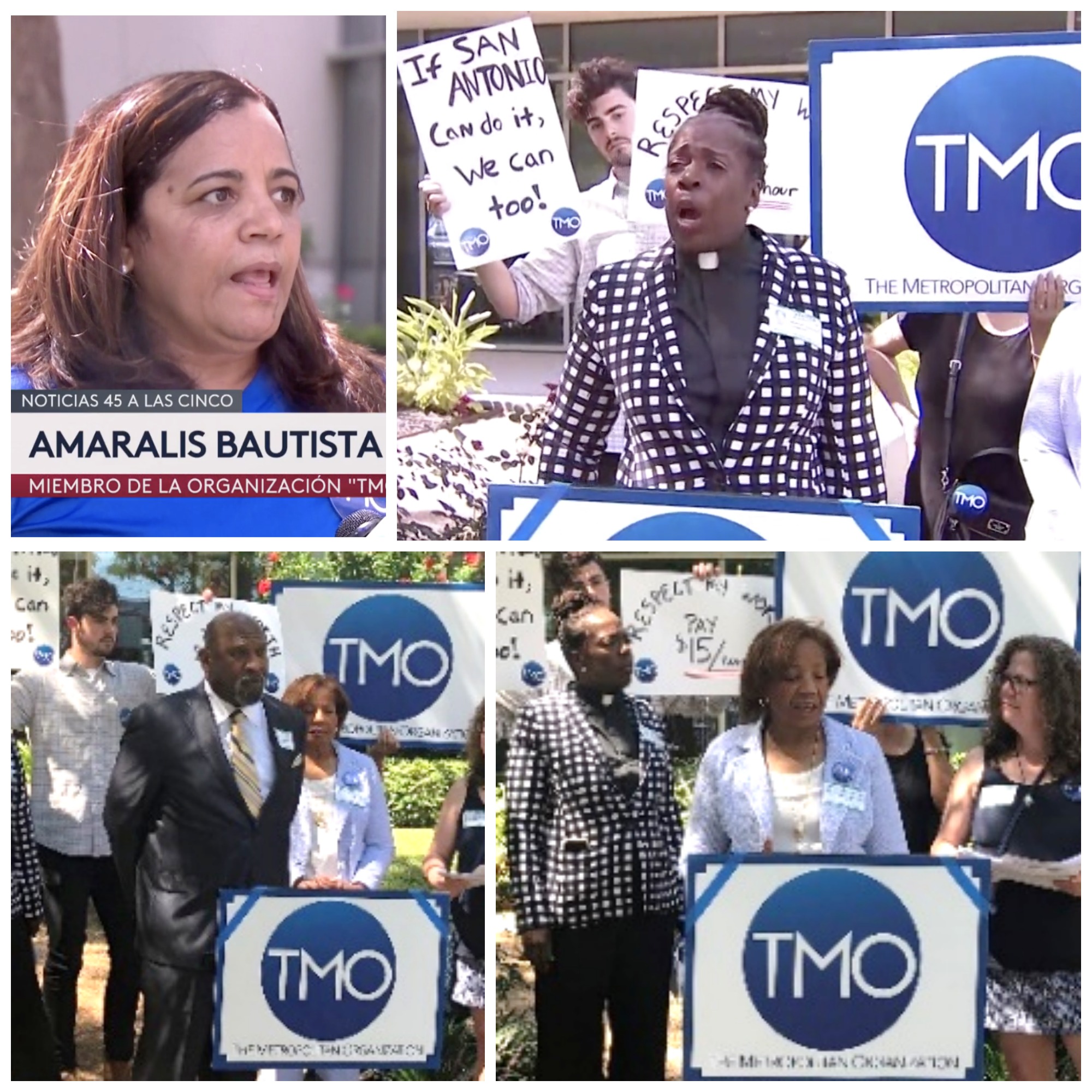 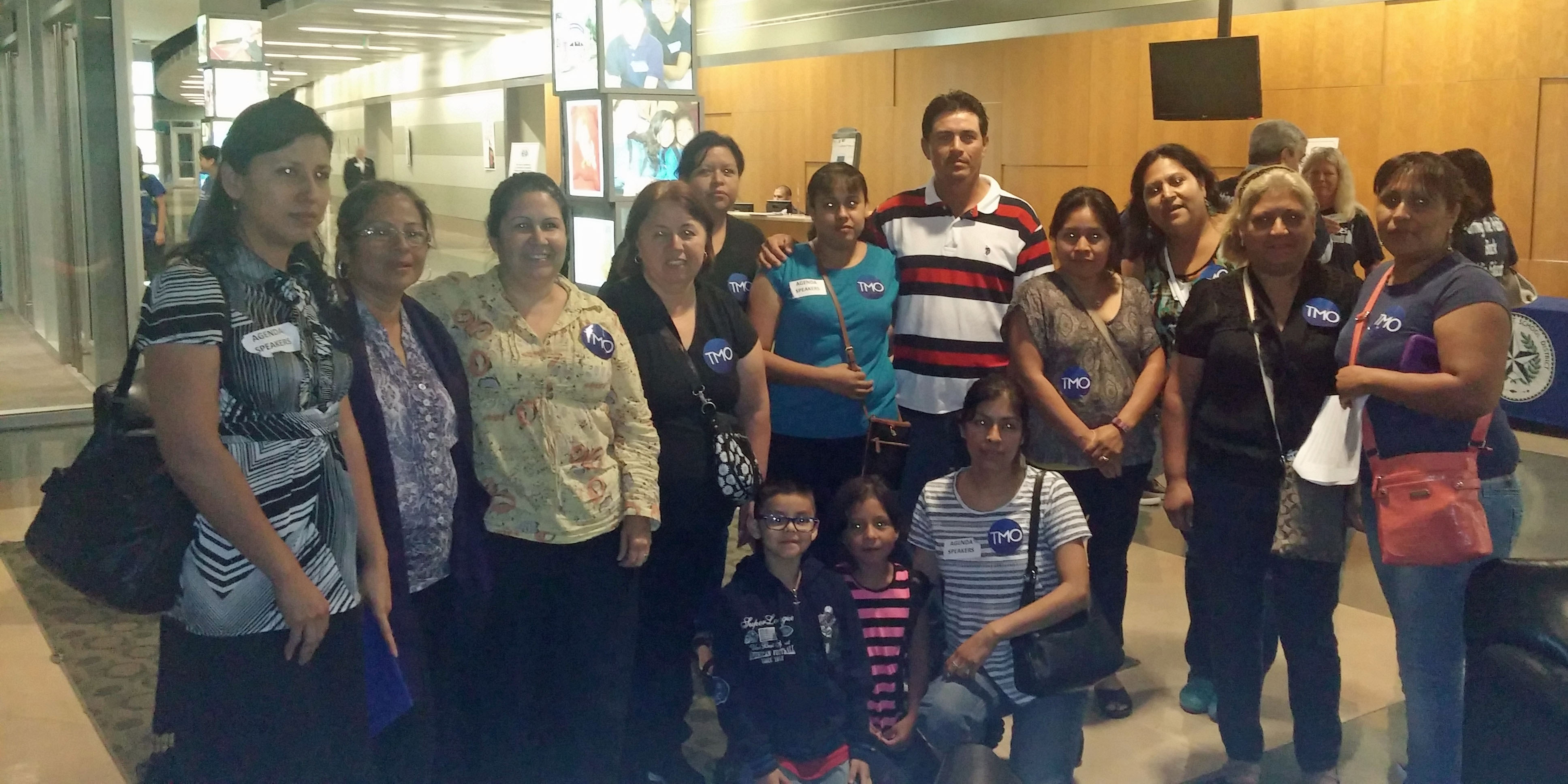 TMO Lyons parents won an 8-1 school board vote against proposed boundary changes to their school. The changes would have sent students from one of the top ranked schools in the state to one ranked in the lowest 18% statewide. Parents signed up 600 petitioners opposed to the change to convinced board members this was a bad idea.

Rosa Rivera told board members, "We want you to listen to us. Don't move our children." Demonstrating that the voices of organized parents get heard, the board rejected the the proposed plan. 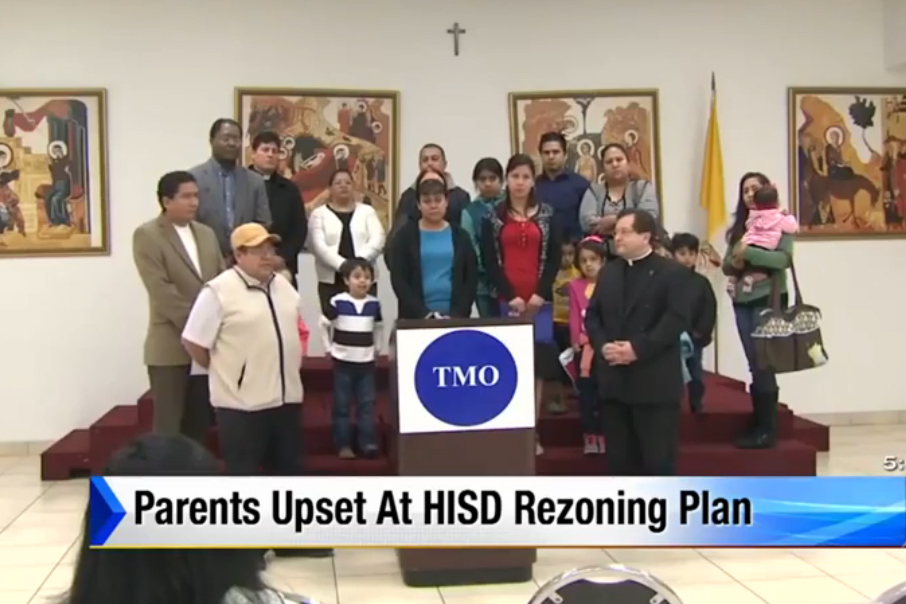 TMO leaders and parents of children attending Lyons Elementary held a pre-board meeting press conference to detail their concerns about the latest HISD proposal to rezone elementary schools. Rosa Rivera argued that a plan to shift new students to nearby elementary schools would negatively impact the education of her children as the nearby schools are not as high quality as Lyons. "Before they start to do all these movements, I would like HISD to improve the schools."

Trustees decided to postpone the vote. 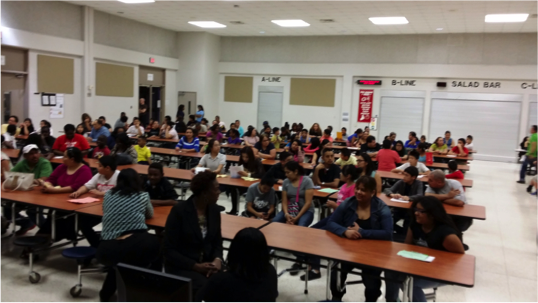 TMO leaders from Memorial Drive United Methodist Church joined teachers from Alief Middle School to talk with parents of 5th graders who will attend Alief Middle School. Pictured are the many parents who attended the orientation. 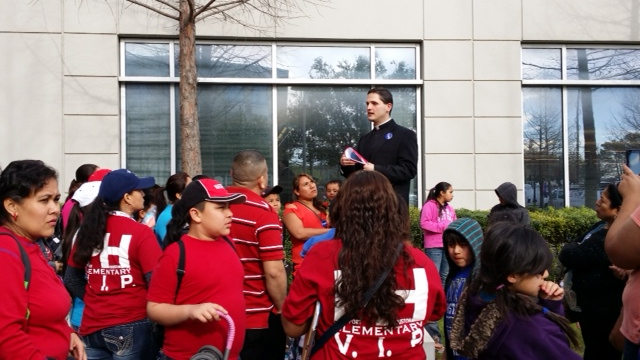 When the Houston Independent School District Superintendent proposed the closure of five schools to cut costs, concerned parents noted that in at least one case students from a higher performing school would be re-directed to a struggling one. Port Houston Elementary School parents, who happened to worship at Resurrection Catholic Church, quickly organized a challenge to the closures in partnership with TMO, which their church had just joined.

Concerned TMO leaders met with HISD board members, in addition to meeting with parents and educators, to figure out how to preserve these schools. On Thursday, March 13th, over 100 leaders and parents descended upon the HISD board meeting and recognized board president Juliet Stipeche for removing Port Houston Elementary, Nathaniel Henderson Elementary and Fleming Middle School from the closure list.

In photo: Father Christopher Plant, pastor at Resurrection Catholic Church, congratulates Port Houston parents and leaders for their turnout and presentation at the HISD school board meeting. 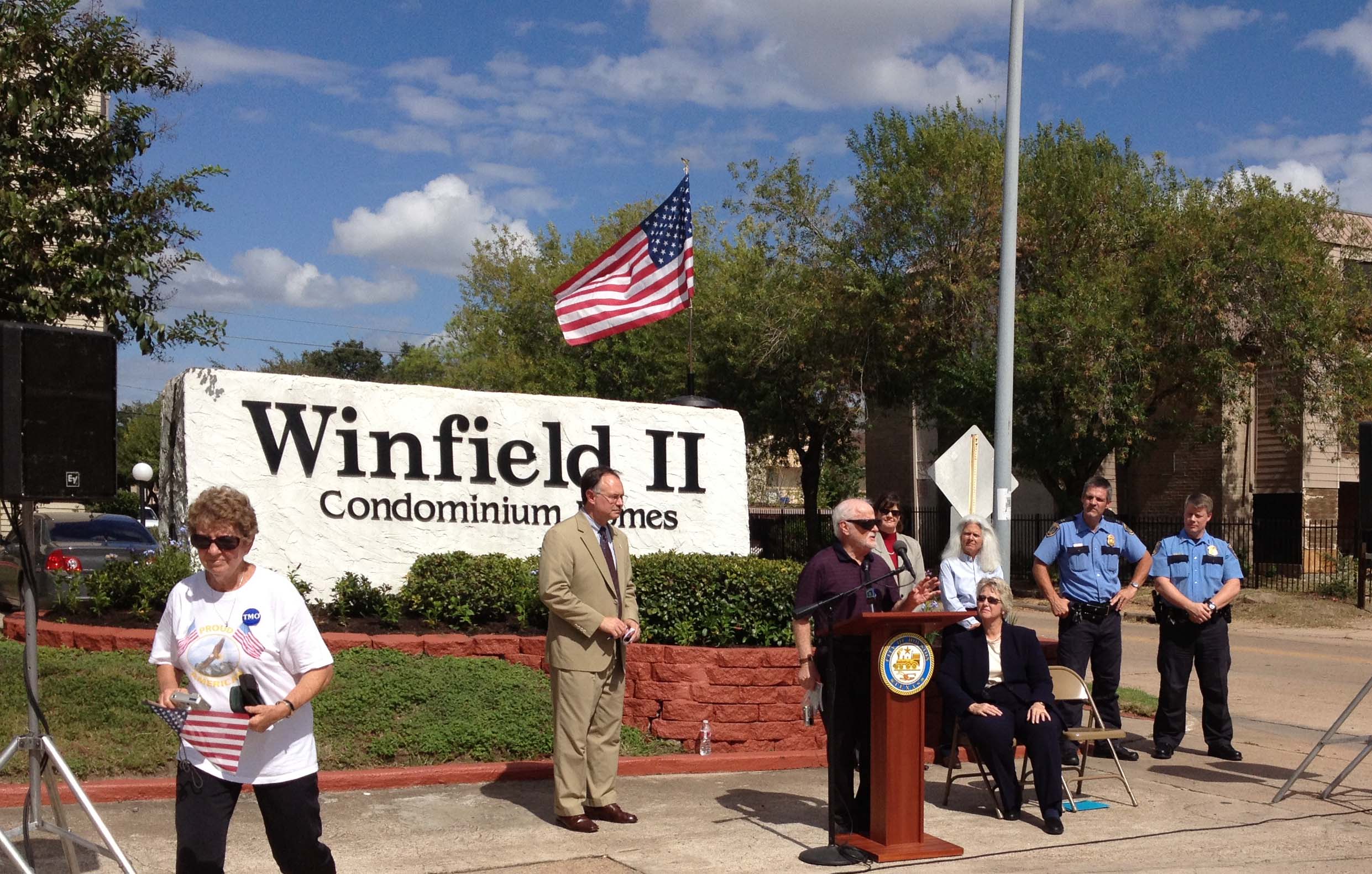 Leaders celebrated the roar of a bulldozer in an Alief neighborhood whose residents have waged a four-year battle to get rid of an abandoned, burned-out condominium complex. In photo at right, Houston Mayor Annise Parker attended the demolition of abandoned apartments.

TMO fought to have the apartments torn down in order to reduce drugs and prostitution near an elementary school. At right, parents engage police officers in a conversation about safety issues near Alief schools.